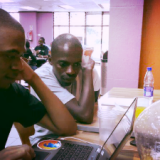 Once again, cure the Mozilla community held a Mozcoffee on the 8th of November with the aim of following up on the last meeting, physician as well as to discuss the community agenda list. The venue, of course, was Debonaire pizza. Fourth time in a row and the turn up was excellent with additional new faces.

The meeting started off with the status updates of previously discussed agendas. Partnership with institutions such as Nairobi Dev. School & Nairobits is underway with a high probability of success. School of Open, together with Mozilla Kenya will initiate partnerships with high schools & primary institutions for the Web Maker and related project.

Alex volunteered to meet with our School of Open contact, Simeone. The Maseno event organized by Mozillan FSA ,Newton was a success .However  more support was needed in terms of Mozilla contributors showing up for such planned events

Despite having only 800 words left to translate the L10 team was concerned that it would take longer than expected due to certain issues such as lack of synchronicity between translations, slow or no internet and lack of time.

Ben and Laura (The London-Based Mozilla Community User Researchers), in conjunction with Equity Bank called for community support by having Mozilla Contributors showing up for the Research event scheduled for 12th and 13th of November 2014. Attendees are required to show up in time since the event will be starting early.

Our main focus this year was basically on L10n, Firefox OS and Web maker where we made tremendous effort as a community. Moving forward, areas that need more focus in the remainder of the year include:

In order to get ready for the release of the Firefox OS in Africa, Mozilla Kenya decided to organize two events:

Since, the Sprint East Africa event is going to be on the ground, Nairobi to be specific, the event will be organized by Mozilla Kenya with the help of interested community volunteers.

In conclusion, the Meetup was a great success with some of the items on the list having been clearly discussed .We would like to welcome our new contributors Ivy, Rispa, Susan, Nate and Dennis (resurfaced contributors) for joining the community.

Get all links to the etherpad below: