On the 15th, sickness 16th and 17th days of January 2016, a meetup that marked the beginning of a one year research project that will be run in Kenya was held. This research will be achieved through a joint effort between Mozilla and Digital Divide Data (DDD). It is worth mentioning that a few other communities were represented at the meetup as well. These are Lake Hub, Mombasa Tech and Jamlab. Members of these communities who were present are also Mozillians.

The research basically aims at understanding how low income earners acquire and adapt to digital phones. It goes further to identify whether this adoption leads to improvement of their lives in one way or another or not. It will be run in 5 locations namely: Mombasa, Kilifi, Webuye, Kisumu and Nairobi. A sample group of about 150 individuals will be used where first time digital device users will be considered. These will mostly be individuals earning less than five dollars a day that have used or own a feature phone and have never owned a smart phone.

Half of the group will be guided on how to use the devices (referred to as being put under treatment), and the other half left to figure out things on their own. Interventions will be run in intervals throughout the year to gather data, insight and find out about any existing problems. Important factors like the level of education, age, gender, ability to read and write will also be quantified. At the end of the study, a clear picture of how the phones have improved and can improve the lives of low income earners should be painted.

The three days meeting served as a good avenue for roles to be further expounded, plans to be made and most importantly for the team members to build a rapport. This is an overview of what took place during that period:

Arrival at the meeting venue was at 9:00am on Friday the 15th with people who traveled from far having checked in at the hotel on the day before. A little bit of tension ran across the room as people became accustomed to a number of strange faces but the familiarization happened faster than would be expected. Probably because of the warm personalities all around the room and some really cool group ice breakers. Within no time, it was apparent that everyone was geared towards playing their part to ensure that the research process went smoothly and achieved the best results.

The team began by confirming that the main agenda was clearly understood and that the topic was formulated in a relevant way. This included the understanding of any relevant open research that was formerly carried out by Mozilla Foundation and DDD.

A general understanding of the target groups was done with angles from which to approach the topic being lengthily discussed. The meeting came to a close at 5:00PM with everyone having been given a lot to think about for the next day. 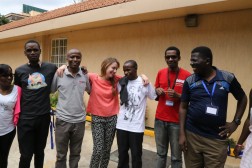 The ideas were many but we had Bobby and Laura from Mozilla moderating and ensuring that the team adhered to relevant topics and that all the key points and issues were documented. The following are some highlights of what was generally discussed: 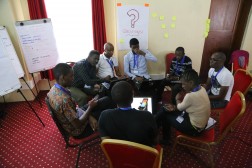 Individuals were then divided into teams and left to discuss the topics for a while. Afterwards, presentations of what each team arrived at were made and questions asked and answered. The day ended with a talk from DDD staff (Joash Mango, Duncan Washington, Dobbz Mkolwe). These are individuals that understand the research process in depth as it is majorly a part of their line of work. In the end, everyone had a lot of insight into things like; how the research process will ensue, the general conduct of a good interviewer plus a few challenges that are typical of the research model and solutions to them. 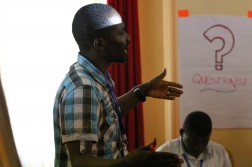 The meeting ended at 5:00PM with an agreement that the team would reconvene later at 8:00PM for dinner. Everyone went home fed, happy and ready for the last day of the meeting.

1.Role picking was finalized, each individual specified the areas of participation in which they were most comfortable with.
2. More solutions to existing and possible problems were formulated.
3. Group photos were taken. Thank you Laura for the awesome photos.
4. The meeting was officially concluded.
5. Goodbyes were said.

Overall (TL:DR)
1. The first meetup for the Digital Skills Observatory (DSO) project was held on 15th, 16th and 17th Jan 2016.
2. The meetup marked the beginning of a one year research project that will be run by the Mozilla Foundation and Digital Divide Data (DDD).
3. A lot was discussed. Meetup was insightful and a success. Great team! There was no shortage of intelligence.
4. Rapport was established. Friendships were made thanks to some really cool peeps and cool icebreakers.
5. Everyone psyched up for the research, great findings can be expected in January 2017.

WORK AND PLAY: THE DIGITAL SKILLS OBSERVATORY MEETUP / Mozilla Kenya by is licensed under a

I am a Kenyan hailing from Nairobi currently studying Bachelor of Business Information Technology. A Mozillian with a passion for all that is open source and basically all that Mozilla stands for. I believe that we can achieve a free web where everyone's privacy is key.

WORK AND PLAY: THE DIGITAL SKILLS OBSERVATORY MEETUP / Mozilla Kenya by is licensed under a