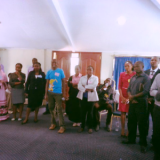 The London-Based User Research group, store in conjunction with Equity Group Foundation set up a series of event s dating 12th and 13th November and 21st and 22nd November with the aim of promoting digital literacy in Kenya .This event attracted community support from Mozilla Kenya  (both the Nairobi and Mombasa community), the Mozilla Uganda Community  and of course, Equity bank.

The Morning Session began with a short introduction done by the event facilitators, Ben and Laura, who expressed their appreciation for the turn up, as well as taking us through the purpose of the event . 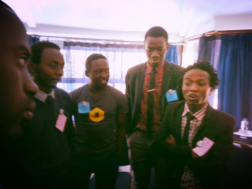 Since the event leaned more on group participation than a conference style setup, the attendees were separated into five groups .First order of business was to start by identifying potential target group (common mwananchi) who could or require the use of a smart phone. Additionally, the groups were expected to identify their attributes and their immediate environment. This was done with the aim of identifying whether the target group would require the use of smartphone apps to improve their day to day lives.

By the end of this session each team had identified the following target audience:

Team Smart: Students /High school and College who is a Business Entrepreneur

The Afternoon session commenced with Ben explaining what web maker project was all about .He was able to take us through all the tools on the website here and show us how easy it was to teach anyone how to use the web. Tools that were demonstrated include thimble (Simple Web Editor), X-Ray Goggles (Code Viewer), Popcorn maker (Video, audio and images Remix Tool) and Appmaker (Mobile App maker). 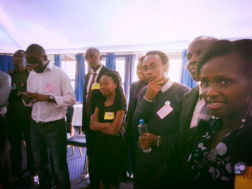 Later on, he gave us an opportunity to go through the Prototype Web Maker App on the Firefox developer device .The Web Maker app was created for the purpose of promoting web literacy all over the world. Each group was required to learn and test the app and figure out how their target group could use it as an everyday tool. As a small exercise, each individual was given a blue and pink sticky note to write what they would like to teach and learn by the end of the event. The notes were later displayed on the glass window

After the day’s event, we got to take a group photo and interact  before leaving.

It was the start of the second day and the excitement was still in the air. The turn up was as good as the previous day and included new attendees .After an amazing Breakfast buffet, we all settled down to get back to business. The morning session‘s agenda was quite simple: To come up with a step by step activity list that would portray how each group would go about teaching its target group on using the smartphone apps to improve their day to day activities .Each group was requires to jot down each activity in a piece of paper and expound on it. For the better part of the morning the teams engaged into frivolous discussion with the occasional help from Ben and Laura

After a long lunch break, we assemble back in the hall to present our activity plan .Each group was requires to give a break down on the how to go about the process, and in some cases, make a small sketch about it. These sessions involved a lot of interaction between members, question and clarification of points. Laura then gave each group a piece of paper to write down the resources that would be needed for the user research project that was scheduled for 21st and 22nd of November .The groups are requires to do a field work on their target audience and execute the activity plan discussed that day.

With the help of Laura (Equity Foundation Group) and her team, all groups were able to decide on the perfect venue to carry out the research and the type of resources required for each group to successfully facilitate the project. A timetable was set up for all activities that will be done on 21st and 22nd of November.

The Equity Group Foundation gave a short vote of thanks to everyone who showed up for the event and were pleased by the progress we made in two days .Firefox devices were handed out to participants, as well as t-shirts ,stickers and key chains .

After the event, there was a cock tail party that saw everyone socialize and make new friends.

All in all, the event was a great success .We would like to appreciate the participants  who  that turned up for the event  , the Mozilla Mombasa Community and Mozilla Uganda community for showing their support that lead to the success of the two day  event. Moreover, we would like to appreciate Bonds Garden for the impeccable food and excellent service that accompanied it